New Zealand reached 2-101 at stumps to trail India by 116 runs in the World Test Championship final on Sunday after Kyle Jamieson had grabbed a five-wicket haul in an exceptional display of swing bowling.

Tom Latham and Devon Conway guided the Black Caps' first innings to 0-36 off 21 overs at tea on the third day at the Rose Bowl and proceeded to extend the first-wicket partnership to 70 after the break. But before bad light ended the evening session, New Zealand had lost both openers.

Latham (30) was the first man out, his rash drive caught by Virat Kohli at short cover off Ravichandran Ashwin (1-20).

Conway (54), who scored 200 on debut against England earlier this month at Lord's, fell after flicking Ishant Sharma (1-19) to Mohammed Shami at mid-on just a few moments before bad light stopped play.

New Zealand captain Kane Williamson (12 not out) and Ross Taylor (0 not out) are at the crease. 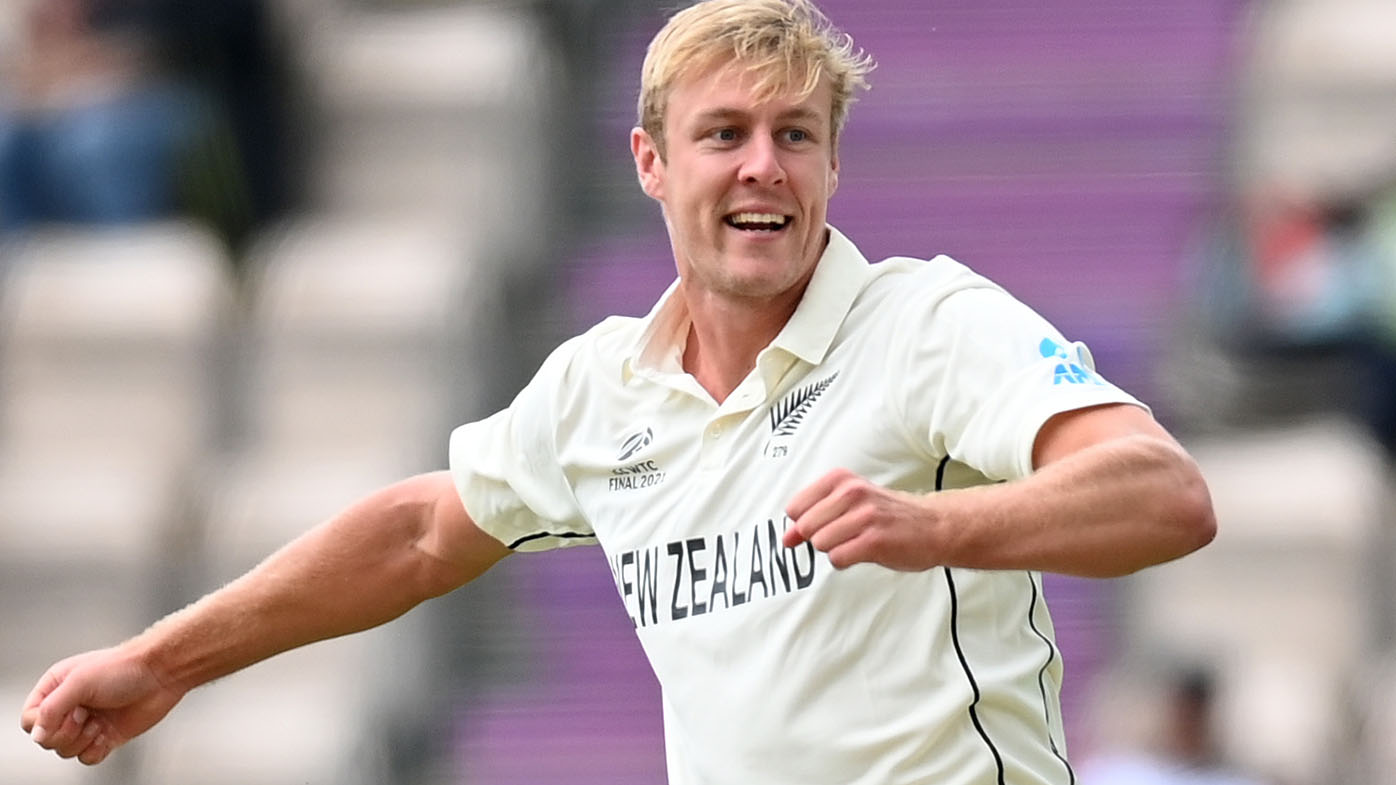 "When the play restarts we'll have a slight edge on them because both of the batsmen are relatively new at the crease," India batter Shubman Gill said.

That seems optimistic, especially after India earlier succumbed to an all-out pace attack for 217 after resuming the day on 3-146.

Jamieson (5-31) struck at the start of each of the first two sessions as India lost its last seven wickets for 68 runs before getting bowled out 30 minutes after lunch.

Jamieson had yet to make his debut when the qualifying period for this final began in 2019 and although this is just his eighth Test cap, he has now taken five five-wicket hauls and boasts 44 wickets at an average of 14.13. Nobody in the history of the game has ever taken more for less.

Jamieson paid tribute to his teammates, starting with Williamson and including fellow seamers Tim Southee, Trent Boult and Neil Wagner, who boast a combined 206 appearances.

"It's just been nice to contribute. For me it's been an absolute pleasure coming to this group," he said. "I've just been able to go about my business, learn off these guys and I guess just ride the coattails of them a little bit." 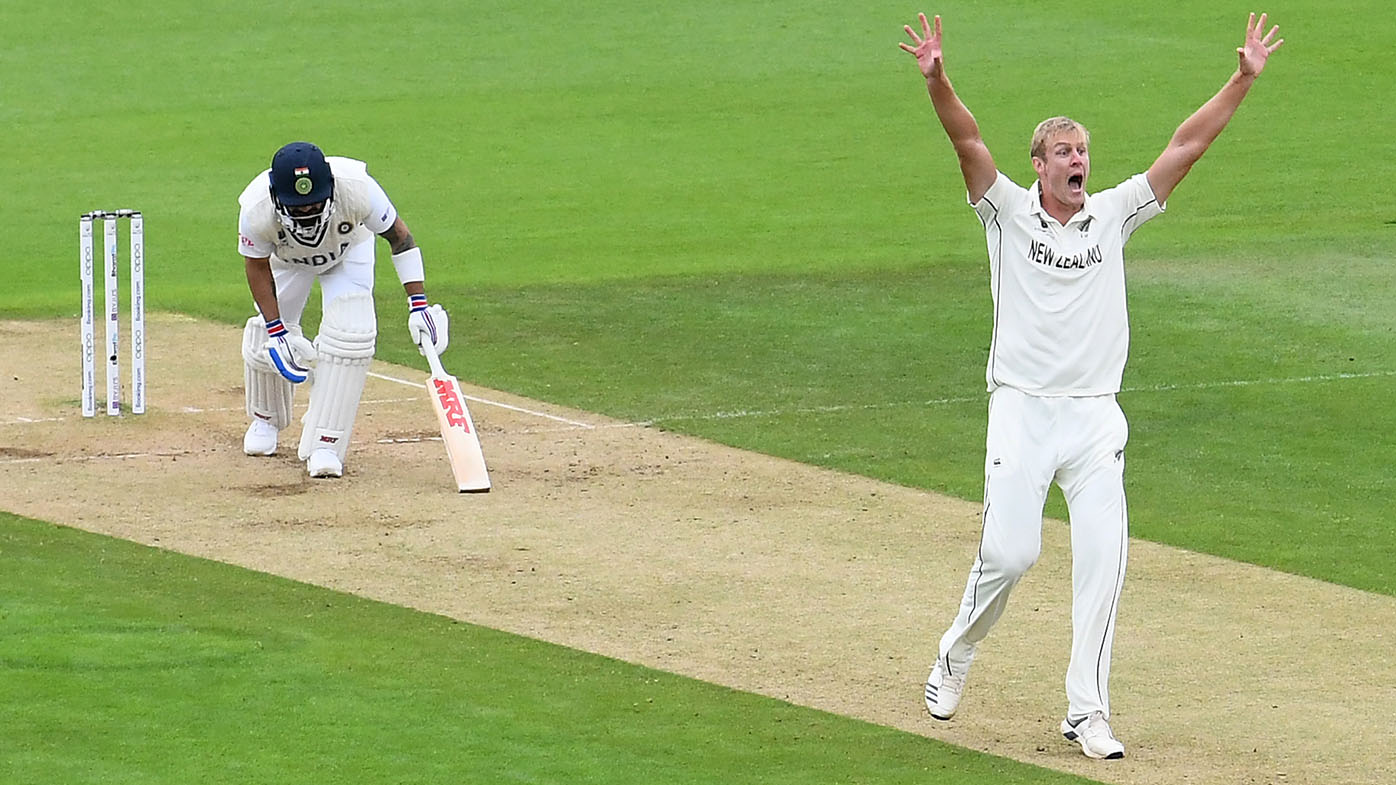 Jamieson got the key wickets of Kohli (44) and Rishabh Pant (4) during a six-over opening spell with the old ball.

The tall fast bowler returned after lunch and with the second new ball removed both Sharma and Jasprit Bumrah off successive deliveries to cap a brilliant 22 overs of swing bowling.

Boult (2-47) wrapped up the innings when Ravindra Jadeja (15) gloved a leg side catch to diving wicketkeeper BJ Watling as the sun briefly came out after inclement weather had disrupted the inaugural WTC final.

After the first day's play was washed out due to rain and only 64.4 overs were possible on the second day, there was also a delay of 30 minutes on the third morning due to a wet outfield.

Kohli couldn't add to his overnight score as Jamieson consistently challenged the India skipper with full-pitched deliveries before trapping him leg before wicket with late seam movement.

Kohli went for a television referral, but the replays clearly suggested the ball would have gone on to hit the leg stump.

Pant, known for his aggressive batting, struggled to negotiate the seam and swing of the New Zealand bowlers before playing a reckless drive off a wayward delivery from Jamieson, offering a straightforward catch in the slips.

Wagner (2-40) brilliantly set up Ajinkya Rahane (49) when the India vice-captain half-heartedly pulled a short-pitched ball straight into the hands of Tom Latham at square leg.

Rahane missed out on his half century and hit five boundaries. 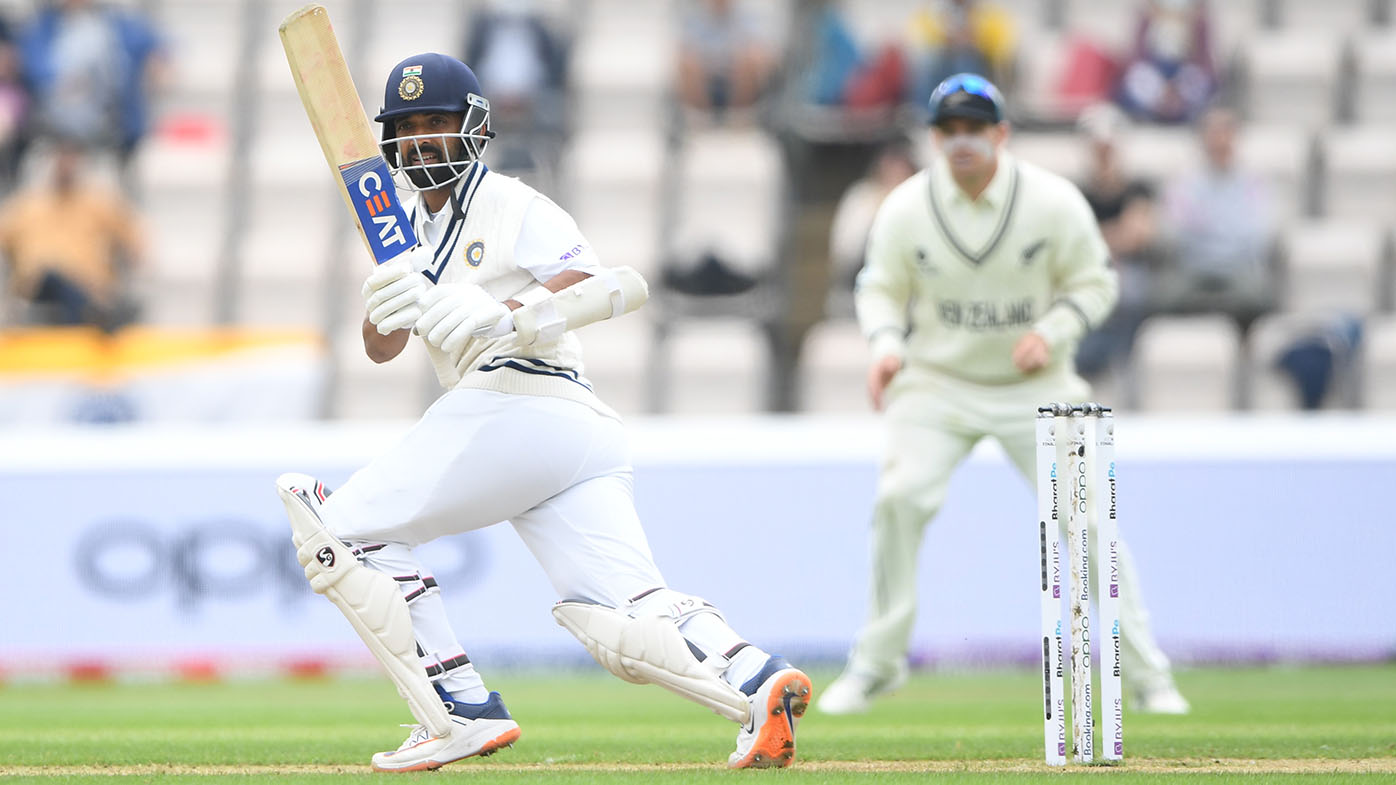 New Zealand's decision to take the second new ball half an hour before lunch paid off when Southee had Ashwin (22) caught by Latham in the slips.

The Black Caps' only blemish in an otherwise dominant third day's play came when Southee dropped a sitter in the third slip from Jadeja, before the left-hander was caught down the leg side after the break.

Heavy rain is forecast on Monday in a game that has already lost huge swathes of time to the weather, and even a reserve day may not be enough to produce a win.

If the outcome is a draw, the trophy will be shared.