The Capitol rioters put themselves all over social media. Now they’re getting arrested.

A pro-Trump rioter poses for a photo with the vandalized statue of former President Gerald Ford. | Saul Loeb/AFP via Getty Images

How law enforcement and internet detectives are identifying the Capitol rioters.

Capitol Police may have allowed nearly every member of a mob of pro-Trump rioters to enter, vandalize, and leave the Capitol building scot-free, but internet sleuths and official investigators are determined to hold them accountable. The reckoning has already begun: several people have now been charged with riot-related crimes, and law enforcement officials promise there are more to come.

After insurrectionists crashed through barriers surrounding Capitol Hill, overwhelmed police, rampaged through the Capitol building, and left dozens injured and five dead, there were relatively few arrests, and many people were allowed to simply walk out. There were few consequences then — only about a dozen of the hundreds of invaders were arrested at the scene — but that’s changing now. Law enforcement and civilians alike are attempting to identify those who allegedly participated. Thanks to the brazenness of many members of the mob, there’s plenty of evidence at their disposal, and it’s being used to charge them with related crimes.

Many participants willingly — and quite happily — posed for photos and videos at the scene, or boasted of their exploits on social media and verified livestream accounts during or shortly after the melee, even though many of their actions may well be serious crimes. Apparently believing they weren’t doing anything wrong or that law enforcement wouldn’t go after them for their actions, the Trump supporters paraded in front of cameras wearing distinct (and thus easily recognizable) costumes and, in some cases, even ID badges.

One notably befurred pro-Trump rioter was identified as the son of a Brooklyn Supreme Court judge. Aaron Mostofsky, who was photographed wearing multiple fur pelts, a vest that said “police” on it, and carrying a police riot shield as well as a large stick, was hard to miss.

Tim Gionet, better known as alt-right white supremacist provocateur “Baked Alaska,” even livestreamed his stroll through the Capitol building (and attempt to use a desk phone to call Trump) to thousands of followers on DLive, where he is a verified partner.

In short, those who stormed the Capitol didn’t leave social media breadcrumbs for law enforcement to follow to their front doors — they left entire loaves of bread.

Several alleged rioters have been arrested in the days following the insurrection, and the arrests of many more are likely imminent. The FBI is calling for “tips and digital media depicting rioting and violence in the U.S. Capitol Building and surrounding area in Washington, D.C.”

“Make no mistake: With our partners, we will hold accountable those who participated in yesterday’s siege of the Capitol,” FBI Director Christopher Wray said in a statement Thursday.

The DC Police Department has also requested “assistance in identifying persons of interest responsible for unlawful entry offenses,” posting on its website a series of photos showing rioters inside and around the Capitol building. One person who brazenly held pieces of House Speaker Nancy Pelosi’s door aloft is suspected of “receiving stolen property,” while another who was photographed vaping while seated behind a desk and using a phone is suspected of “unlawful entry.”

And social media detectives — who deservedly don’t have the best reputation for tracking down potential criminals — are also on the case. An Instagram account dedicated to identifying and naming members of the mob accumulated more than 230,000 followers before it went private. A cybersecurity and disinformation researcher gained tens of thousands of followers during his crowd-sourced quest to identify two people wearing military-style gear in the Senate chamber. 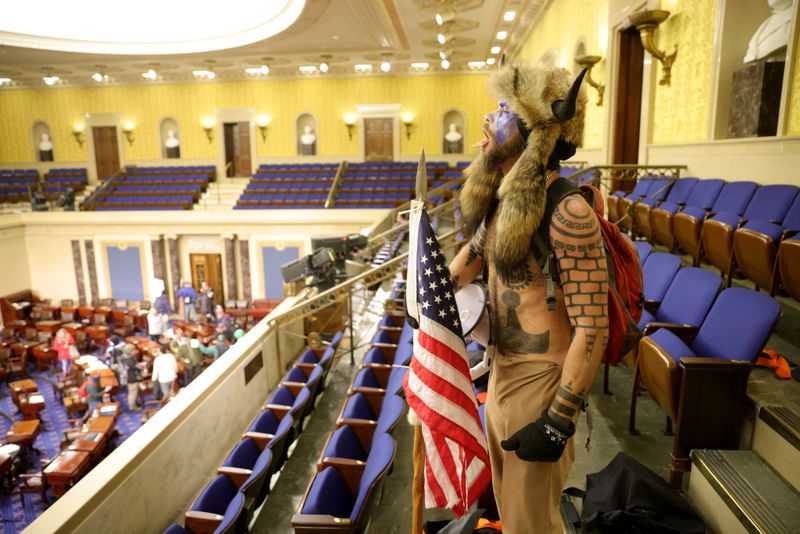 Win McNamee/Getty Images One of the most instantly infamous rioters was Jacob Chansley, also known as Jake Angeli, who wears a distinctive outfit to pro-Trump rallies.

Two of the most prominently featured members of the mob — the shirtless man wearing facepaint and a furry horned hat and the man who put his feet up on a desk in Pelosi’s office — were identified within hours of the riot by press in their hometowns, and arrested in the days that followed.

The horned man is Jacob Chansley, also known as Jake Angeli, of Arizona, a QAnon supporter and right-wing rally fixture whose costume made him easily recognizable. By Saturday, he had been arrested and charged with knowingly entering or remaining on restricted grounds as well as violent entry and disorderly conduct on Capitol grounds. According to the complaint, a Capitol Police agent used tweeted photos of a man who appeared to be Chansley in the Capitol building and matched them with photos of Chansley wearing the same “distinctive attire and tattoos” on his own Facebook page and YouTube account.

Richard “Bigo” Barnett, of Arkansas, was quickly identified by his local news station as the man in Pelosi’s office. He later bragged to the New York Times that his time inside Pelosi’s office included “scratch[ing] his balls” and taking an envelope, for which he said he paid a quarter. Barnett was arrested on Friday and has been charged with entering or remaining on restricted grounds, violent entry or disorderly conduct on Capitol grounds, and theft of public property. 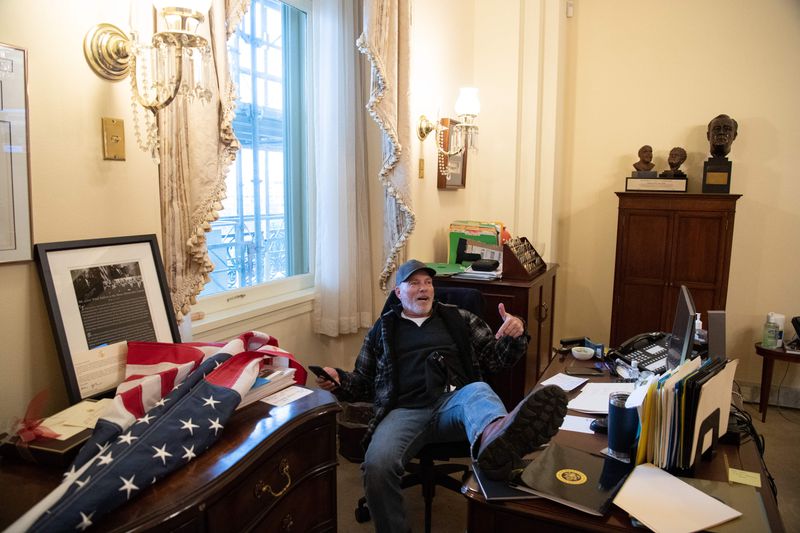 Saul Loeb/AFP via Getty Images Richard “Bigo” Barnett, who boasted of entering Rep. Nancy Pelosi’s office and taking an envelope off of a desk, is now in police custody.

“The shocking image of Mr. Barnett with his boots up on a desk in the Speaker of the House’s office on Wednesday was repulsive,” Jeffrey A. Rosen, Acting Attorney General of the United States, said in a statement.

The subject of another much-circulated photo, of a cheerful and waving bearded man walking through the Capitol with the speaker’s podium, has been identified by the Bradenton Herald as Florida man Adam Johnson (not “Via Getty”). Johnson was arrested on Friday and hit with the same three charges as Barnett. The complaint against Johnson references photos posted on his own Facebook account that appear to show him inside the Capitol building and were sourced from a newspaper article about the riot. Additionally, someone who shared a mutual friend with Johnson called the FBI to report that he was the man in the podium photo. Win McNamee/Getty Images Adam Johnson carries the Speaker of House’s lectern through the rotunda. This photo is part of the evidence cited in the criminal complaint against him.

Also arrested on Friday was Derrick Evans, a freshly sworn-in Republican member of West Virginia’s House of Delegates, who livestreamed himself entering the Capitol building. (He has since deleted that footage and now claims he was there as an independent member of the media.) Evans has been charged with knowingly entering or remaining on restricted grounds and violent entry and disorderly conduct on Capitol grounds. An FBI agent stated in the complaint against Evans that the agent matched the voice in the livestream to one of Evans’ campaign videos, and that the agent was able to review the deleted livestream because it was re-posted on Reddit. Evans’ Facebook page also had several public posts advertising his presence at the January 6 event in the weeks and days leading up to it.

Several of Evans’ fellow delegates have called for him to resign or be removed from his position. West Virginia House Speaker Roger Hanshaw said in a statement that he will “evaluate all the potential consequences once the totality of the situation is understood.” 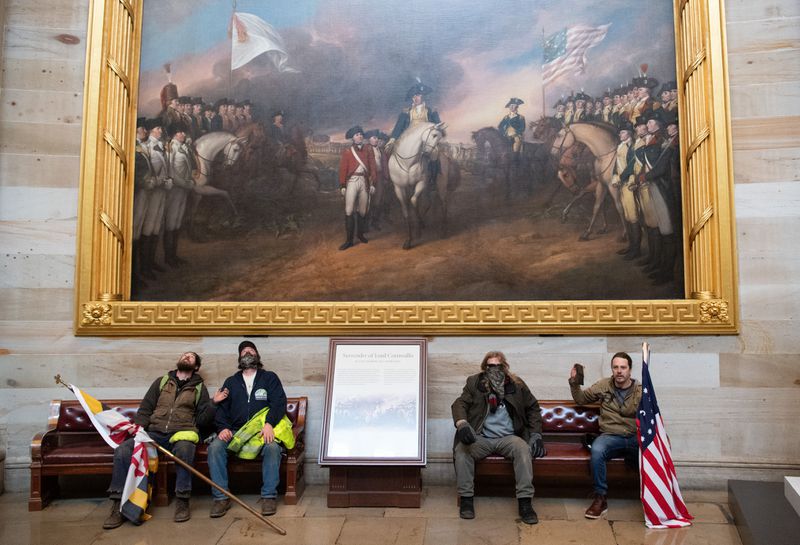 Sitting or incoming state lawmakers from Arizona, Nevada, Pennsylvania, Tennessee, and Virginia also boasted of their attendance at the rally, though, as the Associated Press points out, they may not have been part of the mob that illegally entered the grounds. More brazen was Connecticut’s Joe Visconti, who ran for governor in 2014, who tweeted an image of himself on the Capitol stairs next to graffiti that said “our house” and made sure to tag local publications to alert them of his actions (Visconti has since removed that post).

The repercussions have been professional, too. Several participants have already been fired or resigned from their jobs.

Goosehead Insurance confirmed Thursday on Twitter that Paul Davis, an associate general counsel at the company, was no longer employed there. Davis posted a video on Instagram from outside the Capitol in which he complained of being tear-gassed.

Another man was wearing a clearly visible employee ID badge. He is no longer an employee. Navistar Direct Marketing fired him “after a review of photographic evidence.” Another former employer of the man, Glory Doughnuts, identified him as Nicholas Rodean on its Instagram account.

Libby Andrews, a Chicago real estate agent, was fired from her job on Thursday after @properties said it received “a tremendous amount of outreach” about Andrews, “who acknowledged on social media that she took part in ‘storming the Capitol.’” Andrews told the Chicago Tribune that she didn’t realize she was doing anything wrong and that “it was like a party.”

And former Pennsylvania state representative Rick Saccone, who boasted on Facebook that he was “storming the capitol” and “our vanguard has broken through the barricades,” has resigned from his adjunct teaching position at Saint Vincent College.

Law enforcement has been happy to make use of social media and internet activities to track down alleged criminals in the past, just as they are doing now. Social media feeds and livestreams led to the arrest of protesters in Portland last July, and the FBI used Instagram, LinkedIn, Etsy, and Poshmark to identify a Philadelphia woman who allegedly set two police cars on fire during the George Floyd protests last June.

Arguably, if law enforcement had previously paid this much attention to social media, where Trump fans were openly organizing ahead of the insurrection on Capitol Hill, they would have been better prepared for the riot that followed — and perhaps may have prevented it from happening at all.

Relatively few of the alleged Capitol rioters have been arrested so far, considering how many people were there and how well-documented their alleged actions were. But with seemingly everyone very motivated to hold them responsible — and many of the alleged rioters already identified — expect that number to continue to increase. Acting US Attorney for the District of Columbia Michael Sherwin said on Thursday afternoon that 55 cases had been filed relating to the riot.

“This is just the beginning,” he said.

A Journey through XGBoost: Milestone 2

Have you ever evaluated your model in this way? Interviews with more than a dozen designers on Jeff Bezos's ...